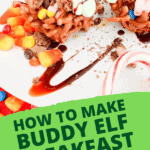 Want to make Buddy Elf breakfast spaghetti from the Elf movie or wondering what does Buddy the Elf put on his spaghetti? This fun Elf movie food is a great addition to a Buddy Elf movie party, Christmas party snacks, Christmas Eve movie night, or an elves theme party. 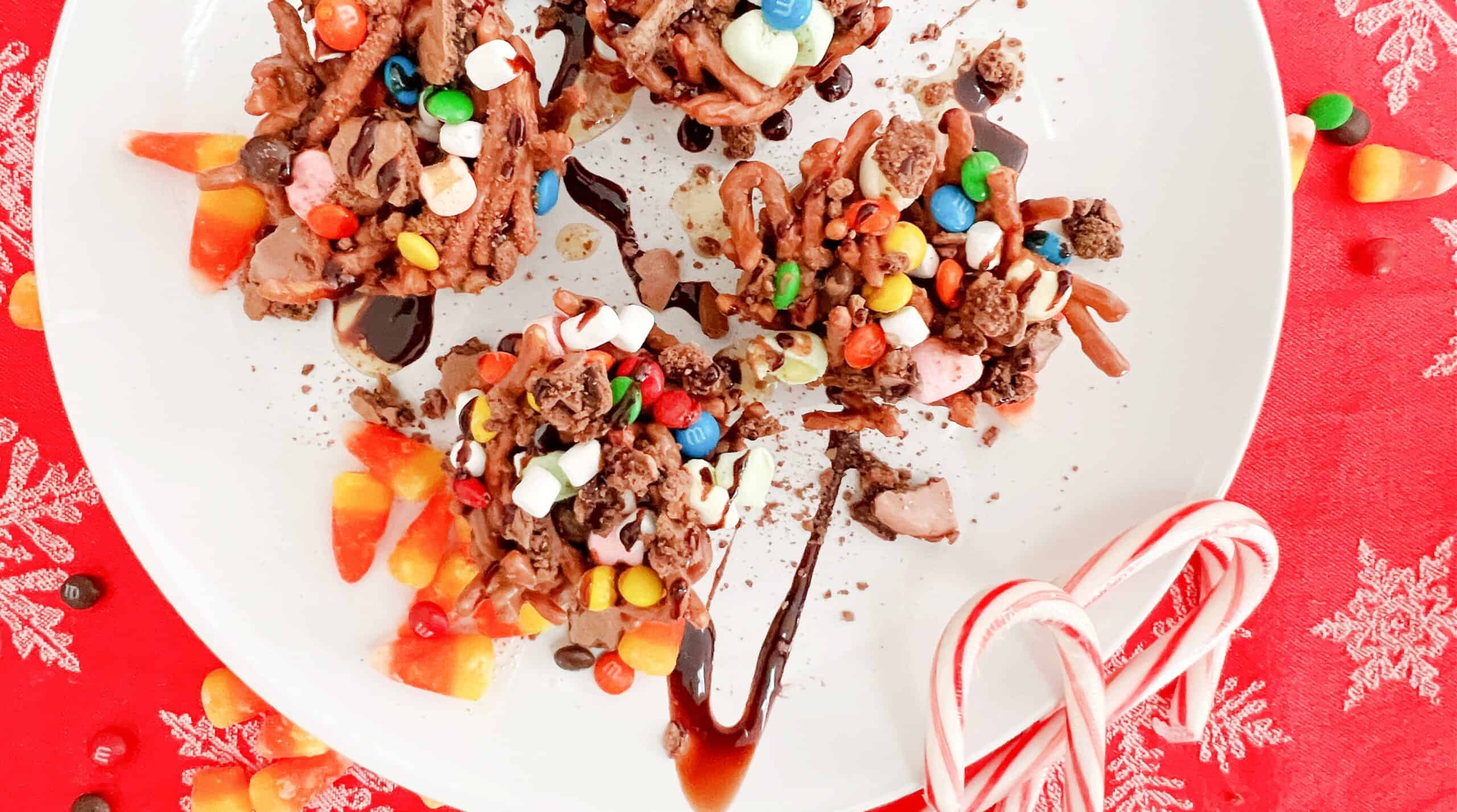 If you’ve watched the movie Elf with Will Ferrell, you probably remember the Elf breakfast spaghetti scene and want to know what did Elf put on his spaghetti?

What does Buddy the Elf have for breakfast?

What does Elf eat with spaghetti?

The Buddy the Elf breakfast breakfast pasta recipe is:

What flavor pop tart does Buddy the Elf use in his spaghetti?

Buddy the Elf uses Fudge Chocolate Pop Tarts with chocolate icing in the breakfast spaghetti scene. He breaks about the fudge poptarts and then smashes them down with his bare hands in the spaghetti for breakfast. The Buddy the Elf spaghetti pop-tarts are a regular flavor and can be found in the aisle with the rest of the breakfast Pop-Tarts. 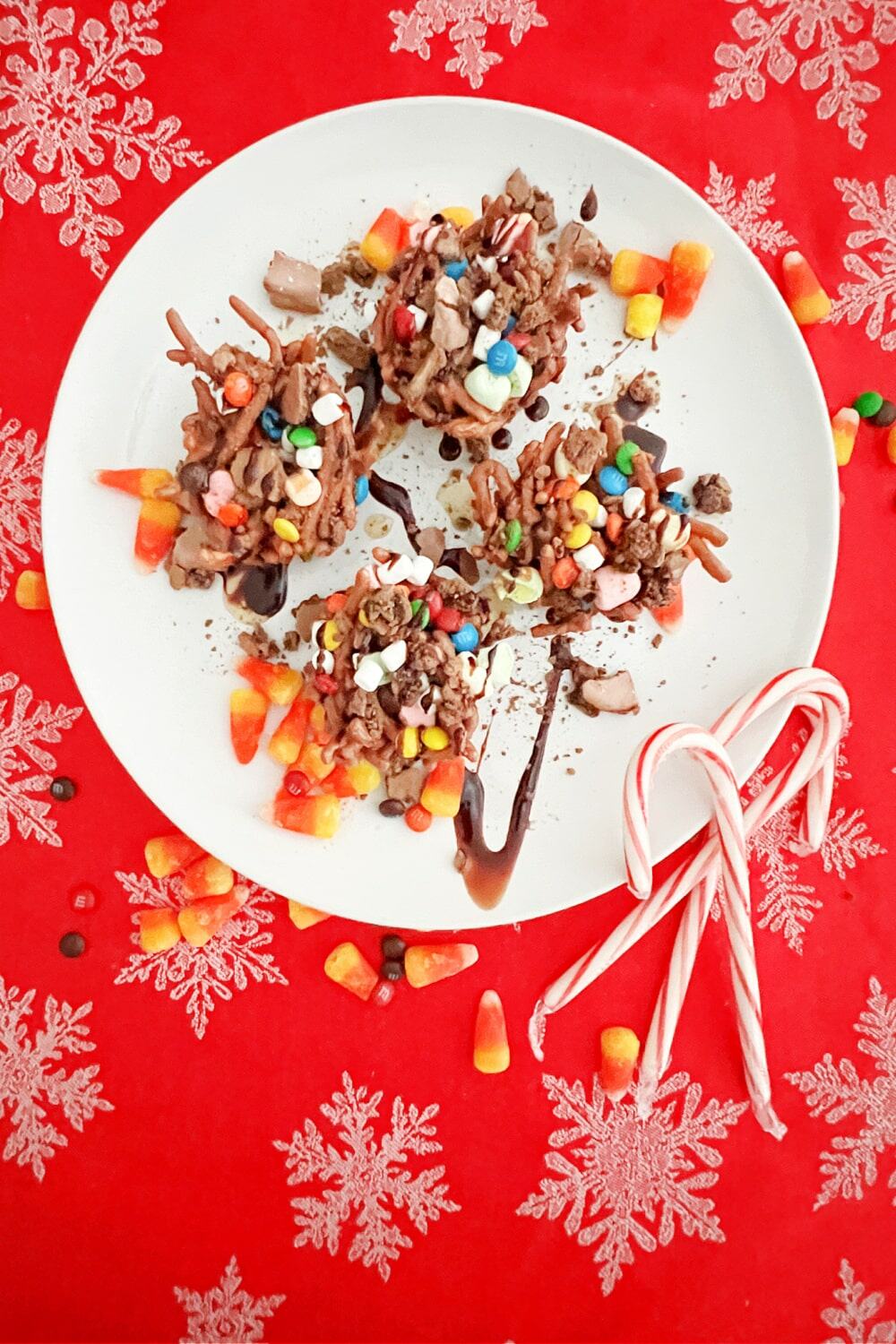 What are the 4 food groups in Elf?

Buddy the Elf quotes that they try to stick to the four main food groups:

He uses these to make Buddy spaghetti in the movie!

YOU’LL ALSO HAVE FUN WITH:

Can we be honest about the Elf food recipe?

Although it’s funny — I mean that classic Buddy the Elf spaghetti pop tarts smash? GOLD — we didn’t want to make the Elf movie spaghetti recipe just to recreate the Buddy the Elf breakfast spaghetti scene and waste food by creating a pasta recipe nobody wants to eat.

We wanted to create a fun holiday treat that gave a nod to the Buddy Elf movie, while also giving you candy spaghetti cookies you actually want to eat!

I mean, does spaghetti and syrup taste good?

I have no idea. (Maybe?) But, these Buddy the Elf pasta desserts sure do!

Here’s how to make Buddy the Elf’s breakfast pasta that you will really eat.

It’s our take on the Buddy Elf spaghetti recipe — except kind of in an Elf Christmas cookie bar form!

If you want to have a lot of fun, allow kids to decorate their own Buddy the Elf spaghetti cookies. 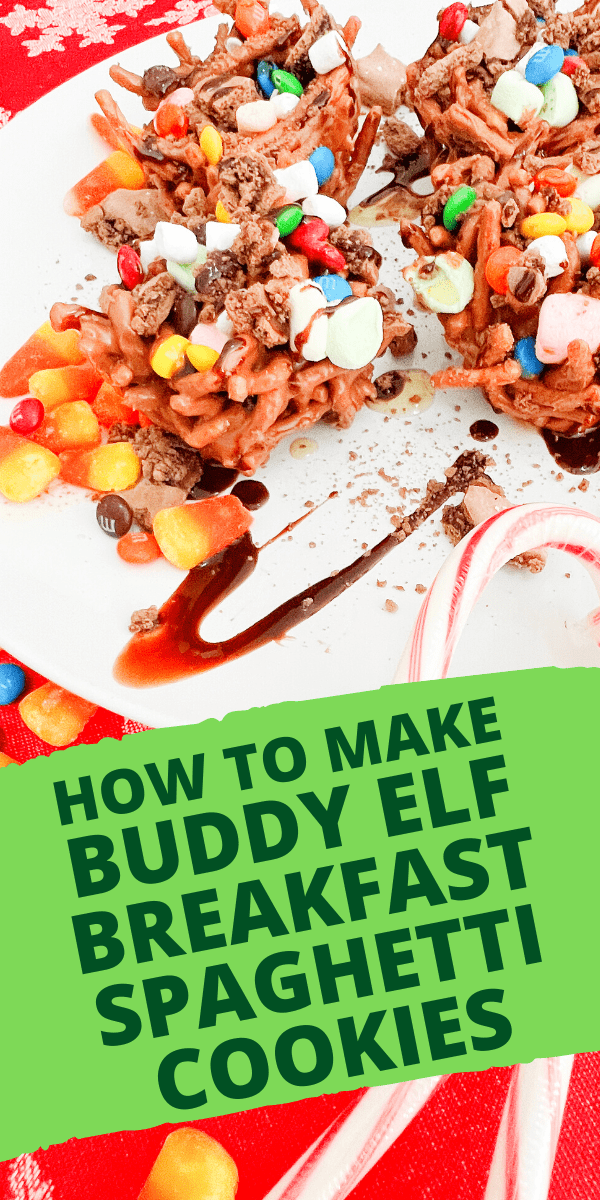 For our Buddy The Elf spaghetti cookie bars, we used butterscotch morsels and also milk chocolate.

If you want a lighter cookie to look more like the color of spaghetti noodles, use white chocolate instead of milk chocolate.

You can also spread these in a baking pan and, once they’ve set, cut them apart for Buddy The Elf cookie bars.

But, we think they’re super cute as little piles of mini spaghetti – no baking required!

Don’t forget that this is Elf syrup spaghetti! Serve garnished with chocolate sauce and maple syrup sauce to stay with the Elf theme. 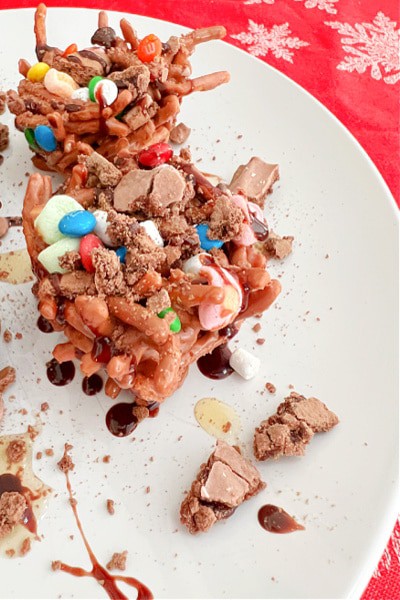 Prepare your toppings ahead of time by placing them in small dishes you can easily access and cutting your colored marshmallows. Since these Christmas cookies set fairly quickly, you'll need to work fast to get your toppings added so they stay on.

If you really want to stick with Buddy Elf's four food groups, garnish the serving platter with candy canes and candy corn, too! 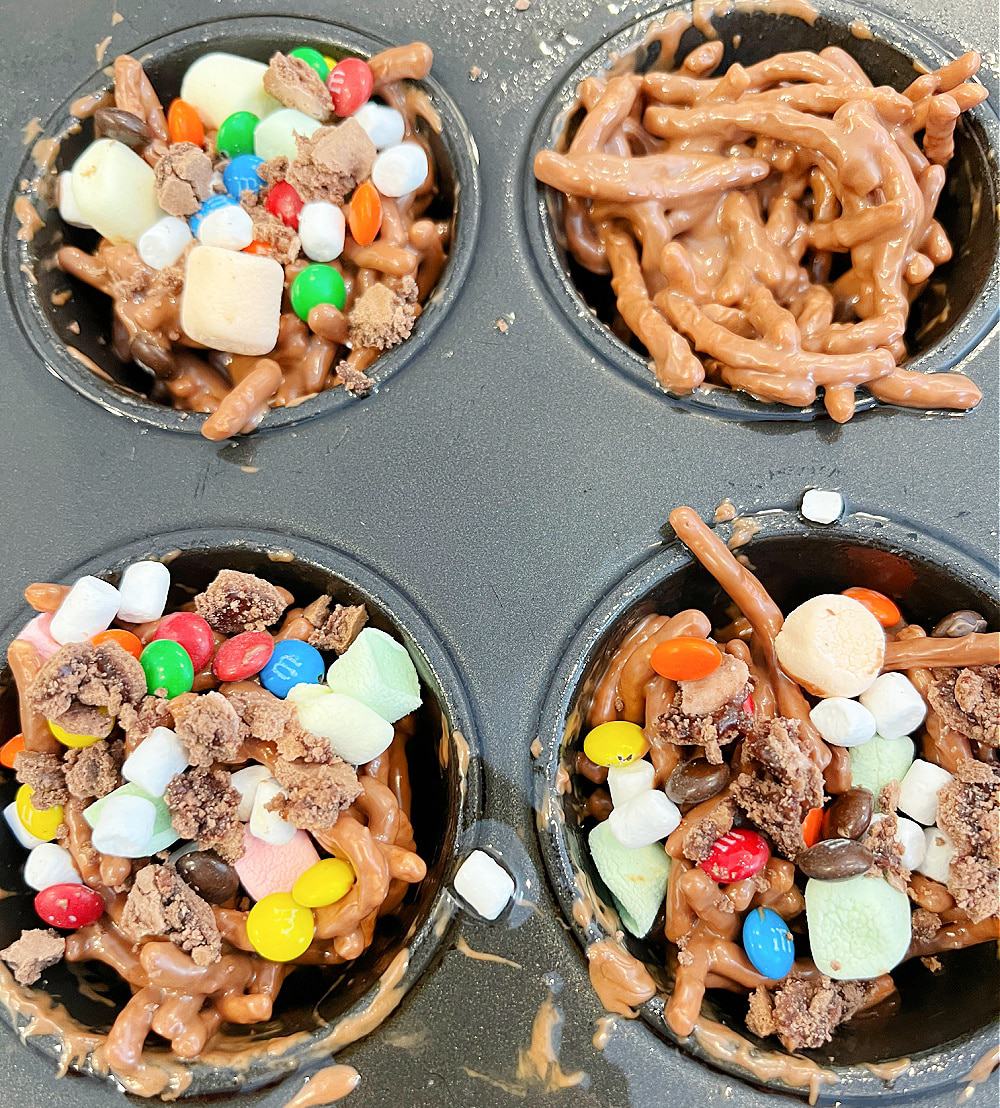 Let us know if you try the real breakfast dessert pasta!

Have fun with our Buddy Elf breakfast spaghetti treats!