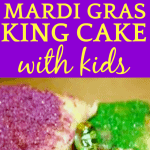 This easy recipe for King Cake is a great addition to your Mardi Gras party or festivities and helps celebrate Fat Tuesday with kids. Homemade king cake recipes can take a long time, so we made this simple cake recipe for kids. We’ll also cover King Cake history and traditions and why they put a baby in the King Cake!

Ask anyone, “What food do you eat on Fat Tuesday?” and Mardi Gras King Cake will be at the top of their list. However, a traditional King Cake from scratch can take around four hours, and this seemed unreasonable for a kid’s project. So, we decided to adapt the traditional recipe for King Cake and make an easy Kiddie King Cake!

Before we get to the easy recipe for Mardi Gras King Cake, let’s cover the Mardi Gras king cake tradition, history and more about the King Cake in New Orleans to add to your children’s lessons!

This is some fun Mardi Gras king cake history for kids before they make the kids king cake!

What is a Mardi Gras King cake?

A Mardi Gras King Cake is a sweet, round pastry, shaped like a circle with a hole in the middle (like a crown). It is popular between early January (for start of carnival) and Ash Wednesday. It can be made with just cinnamon inside or with many different fillings. In New Orleans, it is decorated with Mardi Gras colors and a hidden baby figure is placed inside for good luck.

What is the story behind King Cake?

The King Cake history is based on of the birth of Jesus (Christ Child). In the Bible, the Three Wise Men bring Baby Jesus gifts on the Twelfth Night. The cake and the royal colors is said to honor the Kings and their crown jewels. The cake is sometimes called Three Kings Cake or even the Baby Jesus cake.

When should you eat King Cake?

King’s Cakes are eaten anywhere between January 6th, which is King’s Day or the Twelfth Night, and Fat Tuesday (which is the day before the start of Lent).

What kind of cake is King Cake?

A traditional King Cake is a brioche (or a French bread dough) formed in a circle. It has fillings like chocolate, cinnamon, or cream cheese, pecan praline, or even a Bavarian cream King Cake filling. The cake is then iced with Confectioner’s Sugar icing and sprinkled with colored sugar in the traditional Mardi Gras colors of gold, green, and purple — which are the royal colors of Mardi Gras from the Christian religion.

What is the flavor of a King Cake?

A traditional King Cake is cinnamon, but there may also be different fillings. Some King Cakes are filled with praline, almond, cream cheese, apples, pears or even chocolate.

Why do they put a baby in the King Cake?

The king cake baby meaning is said to represent the Baby Jesus. Also, the baby in the King Cake is a tradition that means good luck. They baby is placed in a piece of the cake before the party and means good luck for the person who finds it!

What does it mean to find the baby in the Mardi Gras King Cake?

You may be wondering what does it mean if you get the baby in a King Cake? Getting a King Cake baby in your piece is a good thing! The person who gets the piece of King Cake with the baby “gains favor” and also provides the King Cake for the party the next year.

IMPORTANT: Don’t bake your cake with King Cake babies inside. Insert the baby into the piece of cake after and then remind everyone that there is a baby inside the piece!

What can I use as the baby in a King Cake?

Traditionally, Mardi Gras King Cakes used a fava bean, or a fève, as the King cake trinket. Now, you will find that they are mostly small plastic baby figures placed in the cake, but you can also use Mardi Gras doubloons or even dried beans.

You can buy a baby for a King Cake online or at any party store (and you can also get doubloons for Mardi Gras).

How do you put the baby in a King Cake?

The baby for a King Cake is not generally baked inside of a King Cake. Once the cake is baked and cooled, you can slice a small hole and place the baby after the cake is baked, or place it in a sliced piece of cake, or even under a piece of King Cake. Some people add a baby during the braiding process, but we recommend adding it after. If you want to bake the baby in the cake, make sure you get one that is designed to be baked in the King Cake. 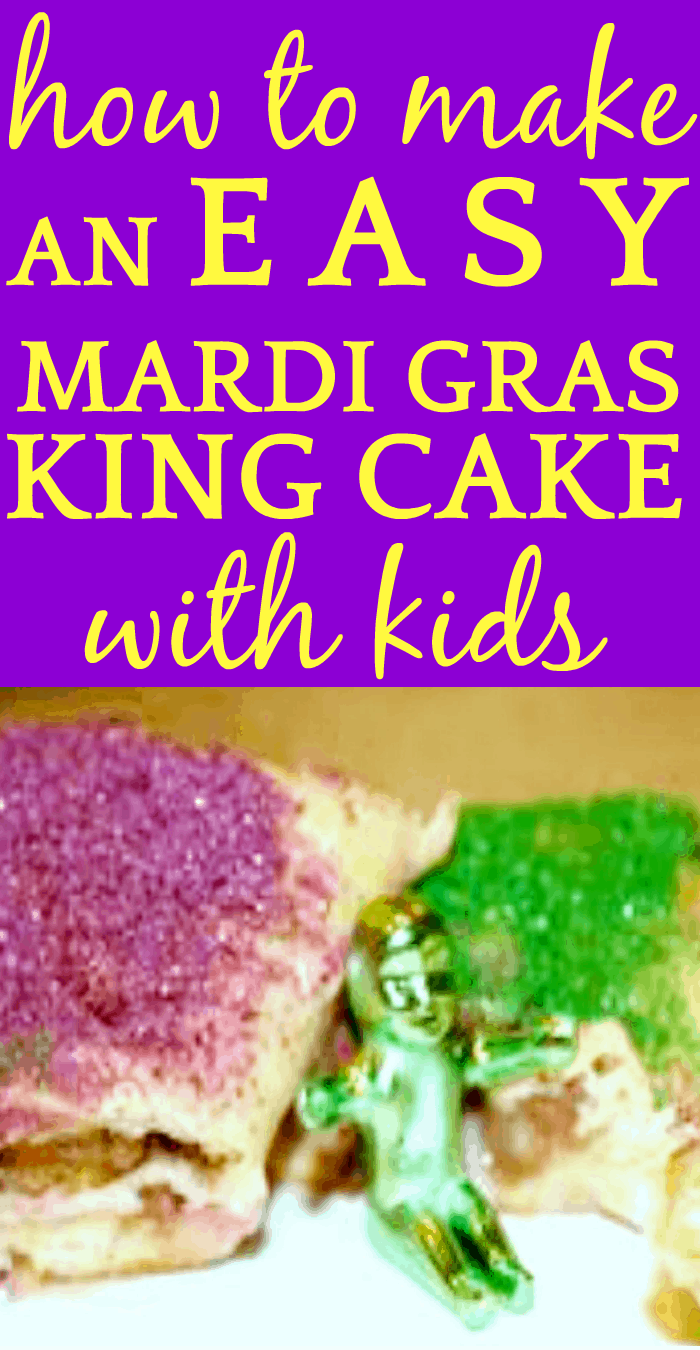 NOTE: This is NOT one of the traditional homemade king cake recipes! This is a modified version (quick and easy cake recipe) that is helpful when cooking with kids and makes it a kid-friendly easy Mardi Gras King cake recipe (as well as the recipe for King Cake icing).

(It also works for a Mardi Gras party, too!)

(You can also buy a King Cake mix if you want a traditional king cake New Orleans recipe but don’t want to make a recipe for homemade king cake from scratch with all the steps.)

TO MAKE THE ICING:

FOR THE KING CAKE BABY:

Be sure to warn your guests so that they are aware of the baby and don’t accidentally bite down on it!

The person who gets the King Cake baby is said to have good for the year and is tasked to bring the King Cake to next year's Mardi Gras party.

You'll also need a King Cake baby mascot that is placed under or in a piece of the cake AFTER the cake is baked. DO NOT BAKE THE CAKE WITH THE BABY IN IT!

My husband and I both love New Orleans.

For years, we visited there often and I consulted for the university there once a month.

(Yes, it was a tough gig, but someone had to go to New Orleans once a month.)

Although we have yet to take our youngest daughter, we talk to her about the area a lot — the food, the culture, the music, the people.

It really is an awesome place and about so much more than Bourbon Street. I highly recommend traveling there with your kids if you can (so much to learn there!).

None of us have been to Mardi Gras, but we can appreciate the religious, cultural and historical ties surrounding it (that has little to do with beads and flashing).

So, I was happy to discuss it with my daughter during a recent homeschooling session and read her Mimi’s First Mardi Gras by Alice Couvillon and Elizabeth Moore.

Mimi’s First Mardi Gras does an excellent job of explaining the entire process, through little Mimi’s eyes and her first Mardi Gras, starting with Twelfth Night, the King Cake, Lent, the parties, the costumes and all the way through the parade day and different Krewes and parades.

If you know little about Mardi Gras, this will be an interesting learning tool for you, too!

The illustrations are wonderful watercolors that fill up almost the entire area on every page. They do a really great job of portraying the different things within a Mardi Gras celebration.

Be aware that the book is 32 pages (almost like a short chapter book), so it may be lengthy for younger kids and you may need to break it up into a couple of sessions.

This is a really great Mardi Gras children’s book to pair with the simple recipe for King Cake!

Enjoy our easy recipe for King Cake for Mardi Gras!