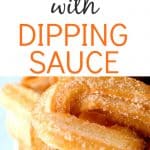 A churro recipe may seem like a daunting task with kids. You might be surprised that homemade churros desserts with cinnamon sugar aren’t as difficult as you think! Learn how to make this churro dough recipe, a dessert recipe that will rival even Disney churros! 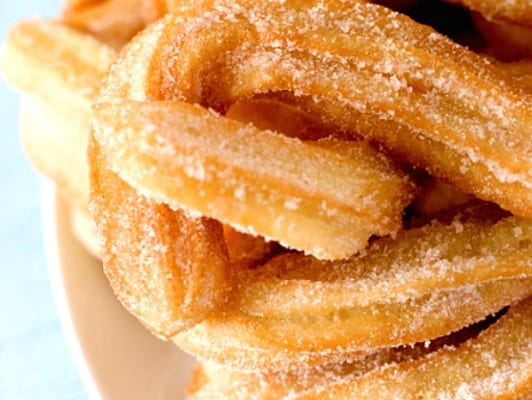 Before we get to our tasty churros recipes and how to make churros easy steps, you may have some questions like…

Churros Origin and History: What Are Churros?

Churros are a Spanish fried pastry dough dusted with cinnamon and sugar found in different Latin American cultures. However, they are also popular in Spain, Mexico and Cuba, where you can often find them filled with different fillings like dulce de leche, caramel, chocolate, and even guava!

Churros are sometimes called a Spanish doughnut and they are a fried dough pastry that is long (like a stick) instead of round (like a doughnut).

I think churro dough is much lighter than doughnuts. They are kind of a cross between a doughnut and a crispy funnel cake or elephant ear for me.

Making churros is much easier to make than I thought it was going to be!

Our easy churros recipe was called the best churro recipe on Pinterest!

OMGOSH These churros are delicious… Best recipe out there and super easy to make… I tried another recipe out there on YouTube, but they were so tough and chewy and I just could not get the inside to cook… If you’re looking for a churro recipe this is the one…. crunchy and delicious everything a churro should be. -Teresa M. on Pinterest

I’ve never had the Disney churros recipe, but someone told me that this recipe was just as good as the Disneyland churro recipe! (YAY!)

What is a churro made of?

What are the ingredients for churros?

Churros ingredients include a basic dough recipe of:

This churros dough recipe is a light pastry dough that is used in many different kinds of pastries (including eclairs). (There’s really nothing special in any of the churro ingredients or churros batter!)

You can also get a churro mix (if you prefer), but making them from scratch isn’t that hard.

Do churros have eggs?

Yes, the traditional churro recipe is a basic dough recipe and it includes eggs. You may be able to find a recipe for churros dough without eggs, but they will be a little different than authentic churros.

Churritos are a flat, deep fried, Mexican food treat. The snack is often seasoned with lemon and chili. Some people confuse churritos ingredients and churro ingredients, but they are different things.

A churro tastes like a light, crispy doughnut. If you’ve ever been to a fair or festival and had an elephant ear with sugar and cinnamon, they taste like a crispier, lighter version of that.

Churros are sometimes hollow or have air pockets inside of them. That’s because they puff up a little when they are fried. The outside of churros traditionally have ridges because they are made with a churrera, which is  a piping press tool with a star-shaped nozzle. (But don’t worry, your churros making doesn’t have to be perfect to be yummy!)

You can also use a piping bag with a star tip.

What can I use if I don’t have a piping bag for churros?

Your churros won’t have those pretty ridges, but they will taste the same!

How long do churros last?

Although churros are best eaten fresh and hot, you can store homemade churros in an airtight container for up to 2 days and they’ll still remain fresh. If you want to keep them longer, you can freeze them for up to 4 weeks, but they will not have that same crunchiness once you freeze and then later reheat.

Do churros need to be refrigerated?

You should really enjoy churros when they are fresh (right after you’ve made them). If you can’t, you shouldn’t refrigerate them because it will make them soggy. Instead, just store them in an airtight container for a couple of days. Anything beyond that and they might start to feel and taste stale.

How do you reheat churros in the oven?

If you want to reheat your churros after they’ve been stored or frozen, simply place them in a shallow baking dish, brush with melted butter, and sprinkle with a little more cinnamon and sugar. Heat in the oven 20 minutes at 350 degrees or until crispy.

What can you eat with churros?

Churros recipes best eaten with dips. There are so many fun dipping sauces for churros, so let your imagination go crazy!

On to the recipe!

You’ll never again search for churros near me when you learn how to make churros at home!

These are fun to make with your Day of Dead food or Cinco de Mayo food, too. 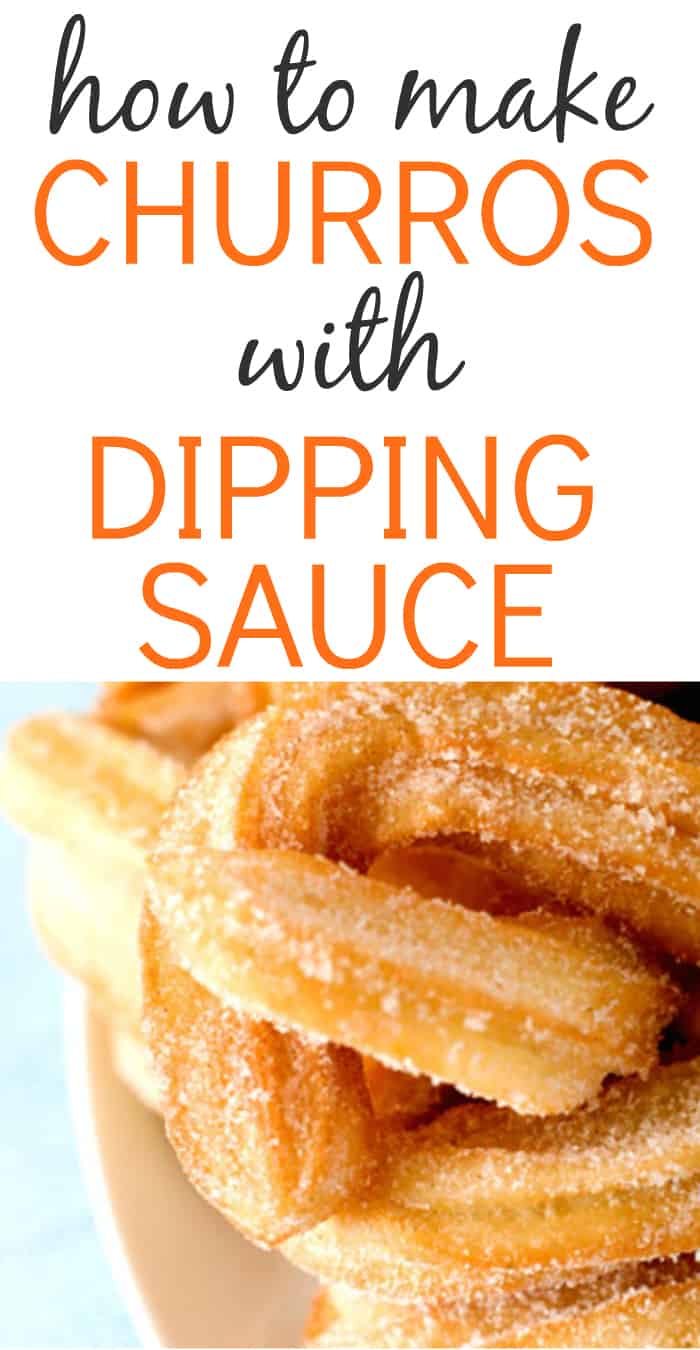 How do you make churros from scratch?

This churro recipe easy to make. The harder part comes in getting them piped just the right way, so it may take a few tries to get them to look exactly like you want!

How do you make churros step by step?

How to make churros is probably a lot easier than you think and your kids will have a lot of fun with this recipe.

We didn’t make our churros recipe baked, we did it the authentic fried way. So be sure you take care of piping the churros sticks into the hot oil part (and not the kids)!

We’ve included step by step instructions on how to make churros, so just follow along our easy churro recipe!

This is the recipe people think about when they talk about making the churro Mexican recipe.

We made them as cinnamon churros with a dipping sauce, but you can definitely leave off the sauce and they’re still yummy.

Why are my churros raw inside?

Uh oh.  So your churros came out raw inside? That’s actually a common thing that happens when frying pastry and usually means that you had your oil too hot. Raw churros inside means the outside of the churros are cooking faster than the inside.

If you lower the temperature of your frying oil a little, it should take care of the churros being raw inside because the outside and inside will cook more evenly.

To make sure you get your oil to the right temperature (which is an important part of a churros recipe), use an oil or candy thermometer.

Are churros supposed to be gooey on the inside?

Churros will be crunchy on the outside and soft on the inside. They should not be gooey or doughy on the inside. If that is happening, the oil you are frying your churros in is probably too hot. Using a cooking thermometer will help keep the oil at the right temperature.

READ AND COOK: The Best Churros Recipe paired with Book of Life

This is a book marketed as a “storybook retelling of the movie The Book of Life!”

In the book, Manolo Sanchez is a bullfighter–one from a long line of champion fighters, as a matter of fact.

However, Manolo doesn’t want to be a bullfighter.

Instead, he wants to play music and win the love of the beautiful Maria, who is the general’s daughter.

That seems like enough to deal with, but Manalo tries to save his town when dealing with magical forces who invade.

The book boils down to the importance of family, friendship and following your dreams.

Our recipe pairing for this one is actually based more on the movie than the book.

In the commercials, one of the characters says, “It’s all you can eat Churros!” and my kid cackles every single time.

So, that seemed like the natural pairing with the book.

Also, this looks like super cool book to add to this study–especially after I read this NPR piece about the movie director and animator, Jorge Gutiérrez.

The Art of the Book of Life

is the behind the scenes peek of the making of the film and the animation.

My daughter is always interested in artists, so I think this would be a good addition to our homeschool artist studies.

A tale packed with adventure, The Book of Life celebrates the power of friendship and family, and the courage to follow your dreams. To determine whether the heart of humankind is pure and good, two godlike beings engage in an otherworldly wager during Mexico’s annual Day of the Dead celebration. They tether two friends, Manolo and Joaquin, into vying for the heart of the beautiful and fiercely independent Maria, with comical and sometimes dangerous consequences. This volume is an inspirational behind-the-scenes look at the making of the animated feature film The Book of Life, from visionary producer Guillermo del Toro (Pan’s Labyrinth) and director Jorge R. Gutierrez (El Tigre: The Adventures of Manny Rivera).

Let us know when you make this churro recipe!