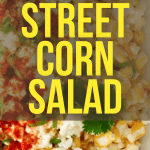 Mexican street corn off the cob, also called Mexican corn salad, Mexican street corn in a cup, or elotes off the cob recipe / esquites, and is a great cookout recipe, food for Cinco do Mayo, summer recipes idea, or any time you’re looking for corn recipes. Super fun recipe for kids to make! 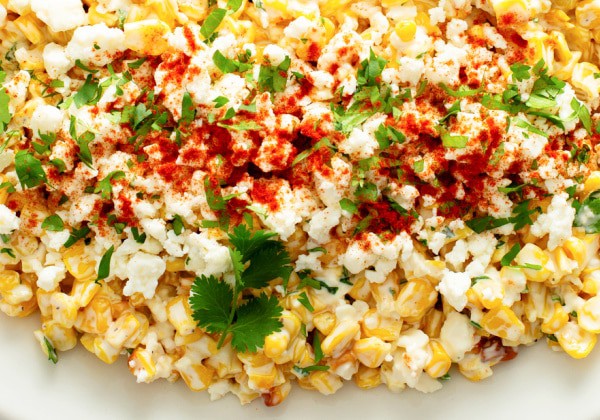 MEXICAN STREET CORN OFF THE COB

When it is made as a smoked Mexican street corn salad the elote off the cob name is called esquites instead of elotes.

What is Mexican Elote?

Mexican elote is a roasted street corn dish, served with a mayonnaise and lime mix and topped with cotija cheese, cilantro, and paprika or chili powder. This easy street corn recipe is served on the cob (elotes) or cut off the cob (esquites, aka elote off cob).

Definitely add this to your Mexican corn recipes! 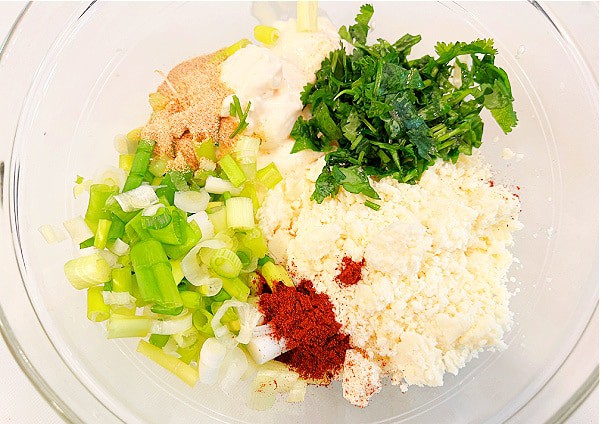 What is Mexican street corn made of?

That yummy roasted corn and elote seasoning (Mexican corn seasoning) is made up of different spices.

I personally like the smoked paprika instead of chili powder for elote and esquite for a more smoky spicy Mexican corn recipe. However, definitely try to get Cotija for your street corn cheese!

Let’s talk about how to make elote off the cob… 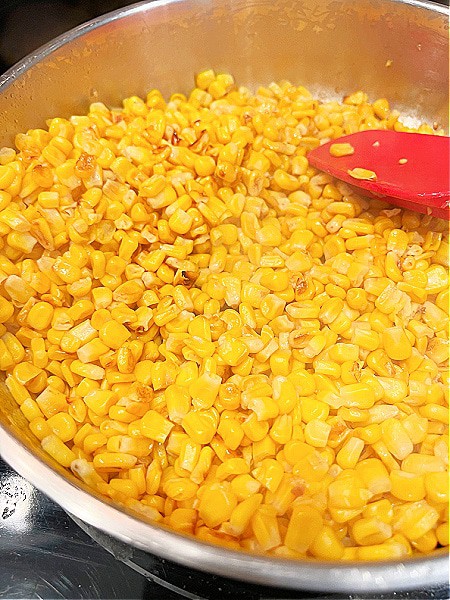 Some people make their Mexican street corn recipe oven, but we make roasted Mexican corn right in a pan! If you’re leaving corn on the cob, you can even make grilled elote!

What’s the difference between Elotes and Esquites?

What’s the difference between esquites vs elotes? Both are a Mexican roasted street corn. Elotes, pronounced eh-loh-tay, is roasted corn on the cob (Mexican street corn on the cob) with a special mayonnaise and cheese toppings. Esquites, pronounce es-KEE-tehs, (Mexican corn off the cob) is the same recipe, but corn is cut off the cob and it is served in a cup and eaten with a spoon. (It’s the corn in a cup in Spanish.)

If you’re wondering how to cook fresh corn off the cob, using it for elotes street corn is a great way!

More Summer Recipes With Corn / Other Food With Corn

Air Fried Corn On The Cob

How do you eat Esquites?

Esquites are served warm in a cup. The roasted street corn is topped with cheese, chili powder or smoked paprika, or hot sauce, cilantro, and lime juice. It is eaten with a spoon right out of the cup.

Elote Mexican corn is served right on the cob with toppings slathered on the elote street corn.

(Learning how to make elote corn topping is the same for esquites toppings.)

Is Esquites served hot or cold?

Esquites is mainly served warm in a cup and eaten with a spoon. However, some people eat this roasted street corn off the cob at room temperature or even cold.

Is there a special Mexican corn cheese? 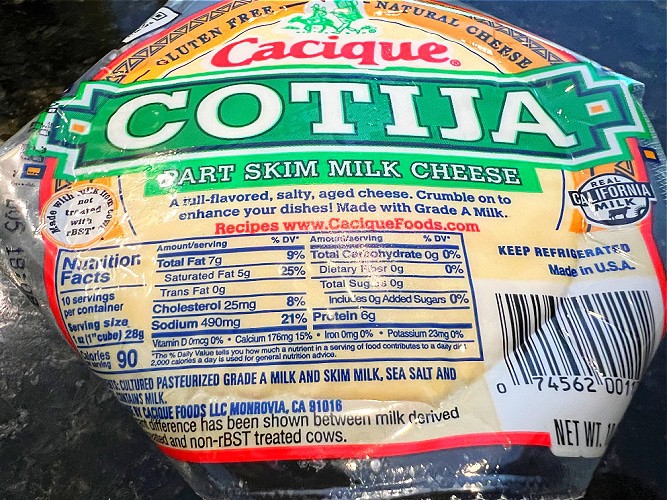 The elote cheese is really what makes a Mexican sweet corn recipe.

Is Cotija cheese the same as queso fresco?

What is Cotija cheese similar to? Cotija cheese, named after the town in Mexico where it came from, is actually a bolder, saltier flavor than the more mild queso fresco. Keep that in mind when making this recipe for Mexican street corn (or any recipe with Cotija cheese) and adjust salt accordingly.

This is the cheese for elote corn and esquites corn recipe (aka: cotija cheese corn!). 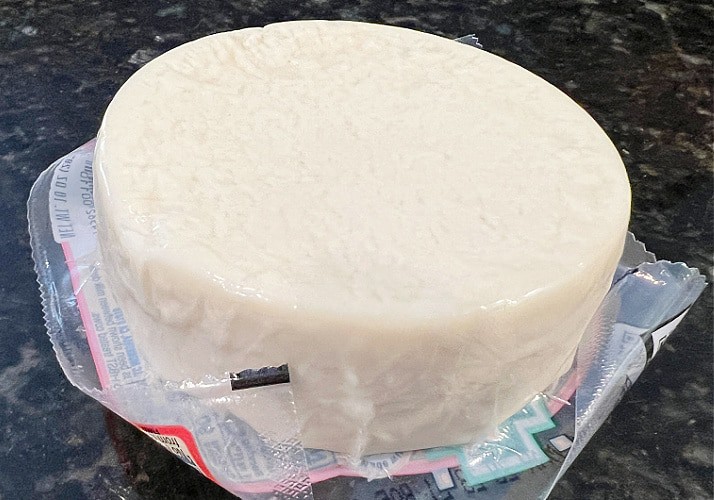 Cotija is a white, crumbly cheese that can be very salty, so taste your corn Mexican dish before adding extra salt!

What can be used instead of Cotija cheese?

If you can’t find Cotija cheese, you can substitute the following for your elote recipe off the cob:

You can make Mexican street corn off the cob with parmesan cheese and nothing else if that’s all you have!

RECIPE & READ FOR KIDS – YOU MAY ALSO WANT TO CHECK THIS OUT FOR YOUR KIDS TO GO WITH THE ELOTE CORN RECIPE:

On to the esquites recipe (how to make elotes in a cup)!

It’s time to stop searching Mexican street corn near me because this is so easy to make you won’t need to buy it again once you learn how to make elote at home / at home equites!

Learning how to make Mexican corn is a simple recipe and a fun recipe to make with kids.

(Don’t miss our recipe and read pairings with this dish after the printable recipe card for Mexican food with corn!) 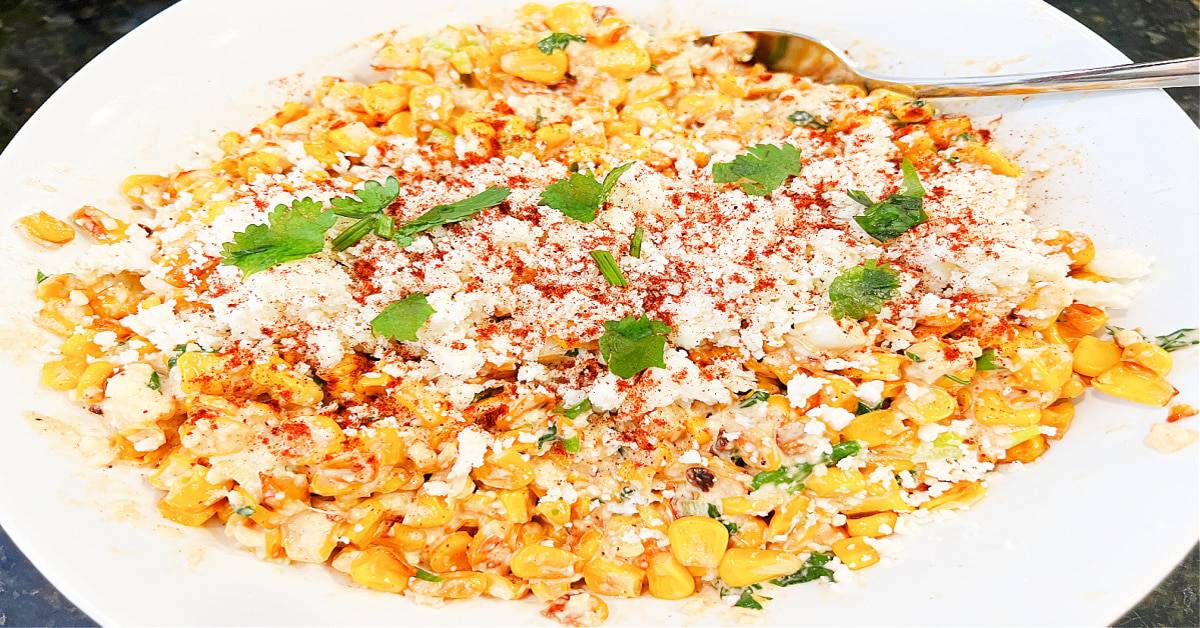 HOW TO MAKE MEXICAN STREET CORN OFF THE COB

Can you make Mexican street corn off the cob frozen corn?

If you’re wondering how do you make Mexican corn that tastes like restaurants, this is it! This is pretty close to the authentic Mexican street corn recipe we’ve had at restaurants! 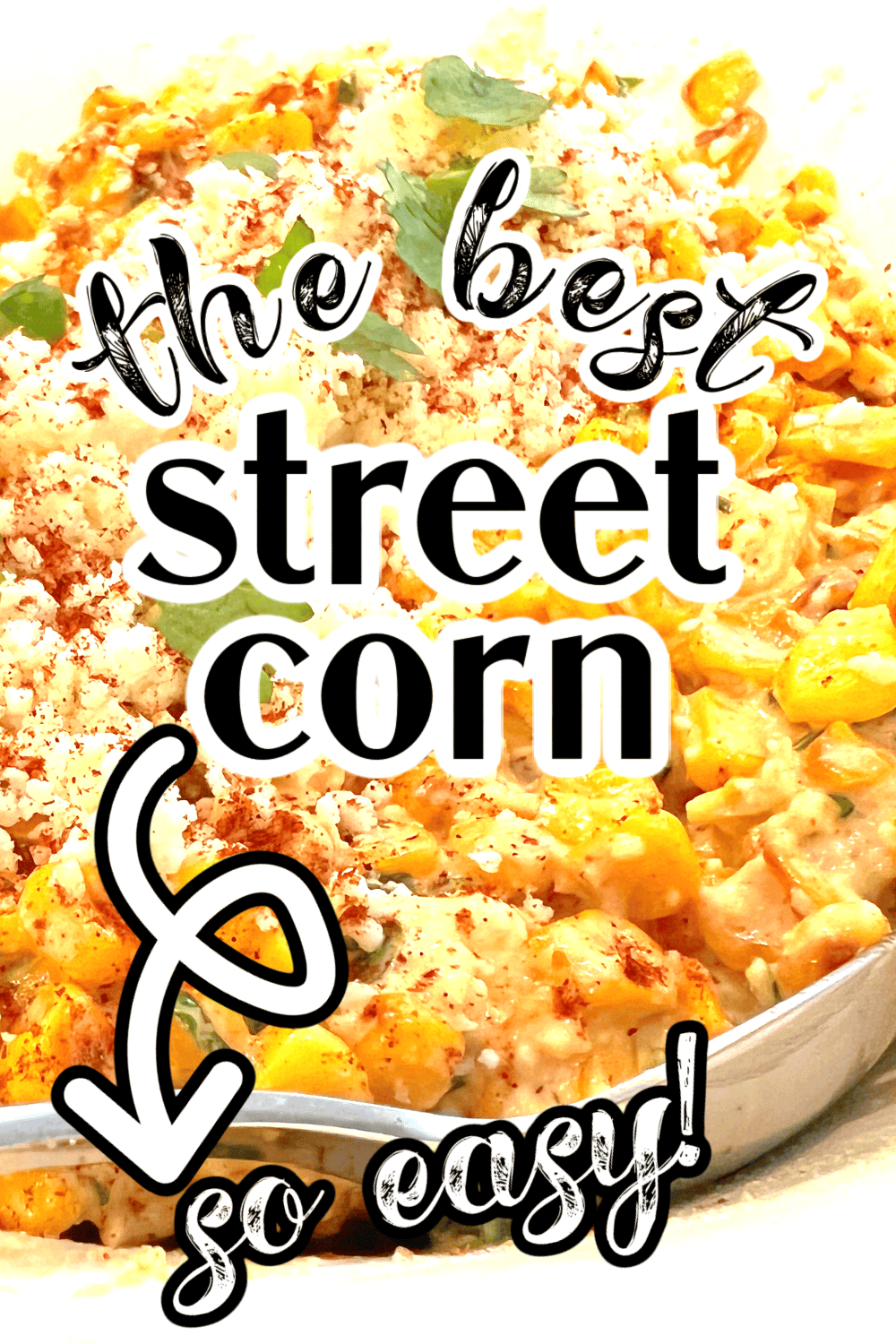 (It’s yummy those ways, too, especially if you like the Costco street corn dip / easy Mexican corn or an elote casserole!)

(I think you’ll be surprised how this street corn recipe easy, so definitely add it to your corn dish recipes!)

Here’s how to make street corn…

RECIPE TIP: There are more recipe tips after this corn mexican food recipe card, so be sure to scroll down!

*You can substitute canned corn for fresh or frozen corn. Use 2 15-ounce cans (no salt added) sweet golden corn. Be sure to drain the corn before roasting.

**This off the cob elote can be super salty because Cotija cheese is salty. Be sure to taste the dish before you add additional salt.

You can also broil the corn in the oven broiler. Combine corn with butter and spread in a single layer on a baking sheet. Broil for 3-5 minutes, until some of the kernels begin to char. WATCH CLOSELY as they can burn quickly!

LEARN HOW TO AIR FRY CORN FOR THIS RECIPE

Some people substitute parsley instead of cilantro (or just leave it out all together).

How do you make Mexican street corn? If you make it differently, let us know in the comments!

Can make Mexican street corn off the cob without mayo?

The elote sauce really isn’t a sauce, it comes from the creamy mayonnaise and the melting of the cheese on the hot corn.

If you make it without those, the corn elote will still taste great, it just won’t be as creamy.

How to take corn off the cob…

How To Get Corn Off The Cob

If you are making Mexican grilled corn on the cob (Mexican corn elote), you can just leave it on the cob and put the ingredients on top. However, if you’re making esquite, then you’ll want to cut the corn off the side of corn cob.

Then, use the corn cut off the cob for your Mexican seasoned corn or any other Mexican food corn recipe!

This elote off the cob recipe is great to pair up with learning about Mexico, Mexican culture, a Cinco de Mayo or Dia De Los Muertos study unit, or a Mexico study unit for kids.

The Mexican corn ingredients are simple enough for children of all ages to help in the recipe step-by-step.

Try these books for reading with children (recipe and read) before making elote corn off the cob and answering what is an elote for kids!

Best children’s books to go with the recipe for Mexican corn (aka: recipe for street corn)…

Munching On Churros In Mexico: Geography Literacy for Kids

Off We Go To Mexico!

Next Stop: Mexico (Time For Kids)

Have you tried Mexican corn on the cob or another elotas? What are your corn recipes Mexican favorites?

This is one of the best Mexican street corn recipes!

Let us know how you enjoy your Mexican street corn off the cob recipe!