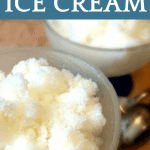 This recipe for snow ice cream (also called snow cream, ice milk / milk snow, snowflake ice cream, condensed milk ice cream, southern snow cream milk or snowman ice cream) is one of those fun winter day activities for kids that you can make with just 3 ingredients! This is the best snow ice cream recipe because it’s such a quick and easy recipe for kids – about 5 minutes after you gather the snow! Definitely add it to your snow activities for kids or snow day recipe ideas! 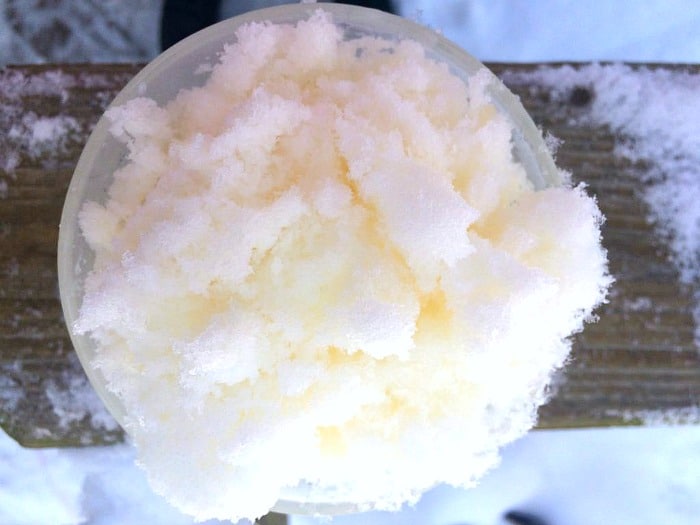 HOW TO MAKE A RECIPE FOR SNOW ICE CREAM

This recipe for snow ice cream is something that I used to make with my mom and brother growing up. (Yes, it’s dessert snow!) I have fond memories of getting a large bowl and filling it with cups of snow and a milk mixture to make a frozen treat! Whether you have a few inches of snow or a few feet of snow, be sure to try this winter recipe with kids! (It really is one of our favorite winter season activities and a family tradition that we look forward to each year!)

How do you make snow cream snow?

Basic snow ice cream can be made with just three ingredients! (If you’re looking for an easy ice cream recipe, this is it!) Here’s how to make ice cream out of snow…

What is snow ice cream made of?

*Some people also add raw egg, but we don’t make this as a snow ice cream recipe with eggs. Also, some people use shaved ice if they don’t have access to fresh snowfall.

(We make this as a 3 ingredient ice cream as a sweet treat or milk snow.)

We’ve made our homemade snow ice cream with sweetened condensed milk and with plain milk and it’s good both ways. (Next time, try the snow recipe both ways and see what you think!)

If you can’t have any ingredient in ice cream, play around with the snow cream (like substitute oat milk or almond milk if you need dairy free ice cream).

If you like a richer flavor, add the vanilla for a vanilla snow ice cream.

It’s a surprisingly simple recipe and the snow cream ingredients are probably things you already have around your house to make snow milk!

Before we get to the full recipe card for how do you make snow ice cream, here are some common questions

Do you put eggs in snow cream?

Some people make their snow cream with eggs, but it’s not necessary! Snow cream is perfectly creamy and yummy with the regular snow cream ingredients and leaving out the eggs.

For this quick and easy snow ice cream, you can also have a lot of fun with toppings!

What toppings can you put on snow ice cream?

Any ice cream toppings that you love will be good on ice cream snow, too!  Along with the key ingredients, you can also adding different ice cream toppers!

Snow creams are fun with toppings! Go with popular ice cream toppings or make up your own fun recipe or different flavors. Divide the ice cream snow into a small bowl for each person and let everyone add their own toppings.

Can you freeze snow ice cream?

If you have leftover snow ice cream, you can freeze it by putting it in a freezer safe container. However, while the flavor will be good, it will not retain that light, fluffy texture of the snow cream (which is one of the best parts!). So, if you’re wondering can you freeze snow cream, you can but it’s better to eat it fresh. It’s not a great idea because it’s really not as good the next day.

Before we get to how to make homemade ice cream with snow recipe, here’s some info in case you’ve never heard of this frozen treat recipe and that will also help with snow ice cream ingredients questions.

About Making Ice Cream With Snow

If you’ve never heard of it, you may be wondering what is snow cream.

What is snow ice cream?

Snow ice cream is simply a frozen ice cream treat made from (you guessed it!) fluffy snow! Using the ingredients (like snow and cream!) to make snow cream, snowing ice cream becomes a frozen, creamy treat for a winter day.

Making ice cream from snow is something your kids will remember as a fun childhood activity! (That’s why I wrote about it!)

What is the difference between snow ice cream and real ice cream?

Snow ice cream is made with snow and a few other simple ingredients (like condensed milk and sugar) and is lighter and fluffier than regular ice cream (like a shaved ice cream), which is a more dense and heavy frozen dessert treat. However, vanilla ice cream and snow ice cream have similar flavors.

Some people like to call this sno cream ice cream because it’s like an ice cream sno cone (but I think snowflakes ice cream is a cute name!).

What can you use instead of condensed milk in ice cream?

How To Make Snow Ice Cream Without Milk

(You can even make it a recipe for vegan ice cream with coconut milk!)

Can you use evaporated milk instead of heavy cream for ice cream?

Evaporated milk is just a shelf-stable milk in a can. You can use evaporated milk for your snow ice cream, but it won’t be as creamy or sweet as when you use sweetened condensed milk, so you may need to adjust the sugar if you like sweet ice cream. So, you can definitely make evaporated milk ice cream!

YOU MAY ALSO LIKE TO TRY: Fried Ice Cream in the Air Fryer

What flavor is snow cream?

If you use vanilla in your snow cream recipe, the flavor will have a slightly vanilla flavor. However, you can omit the vanilla and snow ice cream will still taste sweet because of the sugar added.

Is it safe to make snow ice cream?

Many people wonder is fresh snow ice cream safe to eat and is snow edible? You definitely need to gather fresh clean snow. (Yes, even from the first snowfall!) We do this by putting a bowl outside and collecting the snow while it’s falling fresh or we gather a clean patch of snow off the top of something (like a table) right after it has fallen. You’ll have to decide and eat snow at your risk. If you see particles in your snow, discard it. (Never eat yellow snow or dirty snow!)

You can also make this old fashioned snow cream recipe using shaved ice cream instead of snow using a snow ice cream machine (especially if you don’t live in a snowy climate).

Then you can make sno ice cream even if you don’t live in an area with snow!

The texture with a snow cream recipe for shaved ice will be a little different than with fluffy snow fresh fallen, but still good.

Try these other fun winter kids activities, recipes with snow, and ideas for your next snow day (and create more favorite traditions!):

Do You Wanna Build A Snowman Treat Bags

Can you make snow ice cream with the first snow?

Yes, you can make snow ice cream with the first fallen snow — as long as it’s the fluffy kind of snow and as long as you collect the snow in a from a clean area. We prefer to collect the snow in a big mixing bowl as it’s falling and the amount of snow you collect will depend on how much snow cream you want. (It will reduce down when you add the milk and other ingredients, so be sure to get enough snow.)

As with any recipe, use your own judgment and eat the snow at your own risk when making your ice cream made of snow.

Even though Lucy van Pelt says, “It’s too early. I never eat December snow. I always wait ’til January,” you can still make snow ice cream with the first snow for yummy snow treats.

It’s a best part of winter or being stuck at home during a snow storm and you’ll want to add making ice cream out of snow an annual winter-time tradition!

DEFINITELY add it to your recipes for ice cream (or even shaved ice recipe ideas if you want to make snow cream without snow)!

You’ll be shocked at learning how making ice cream from snowflakes is so fun!

On to how to make snow cream… 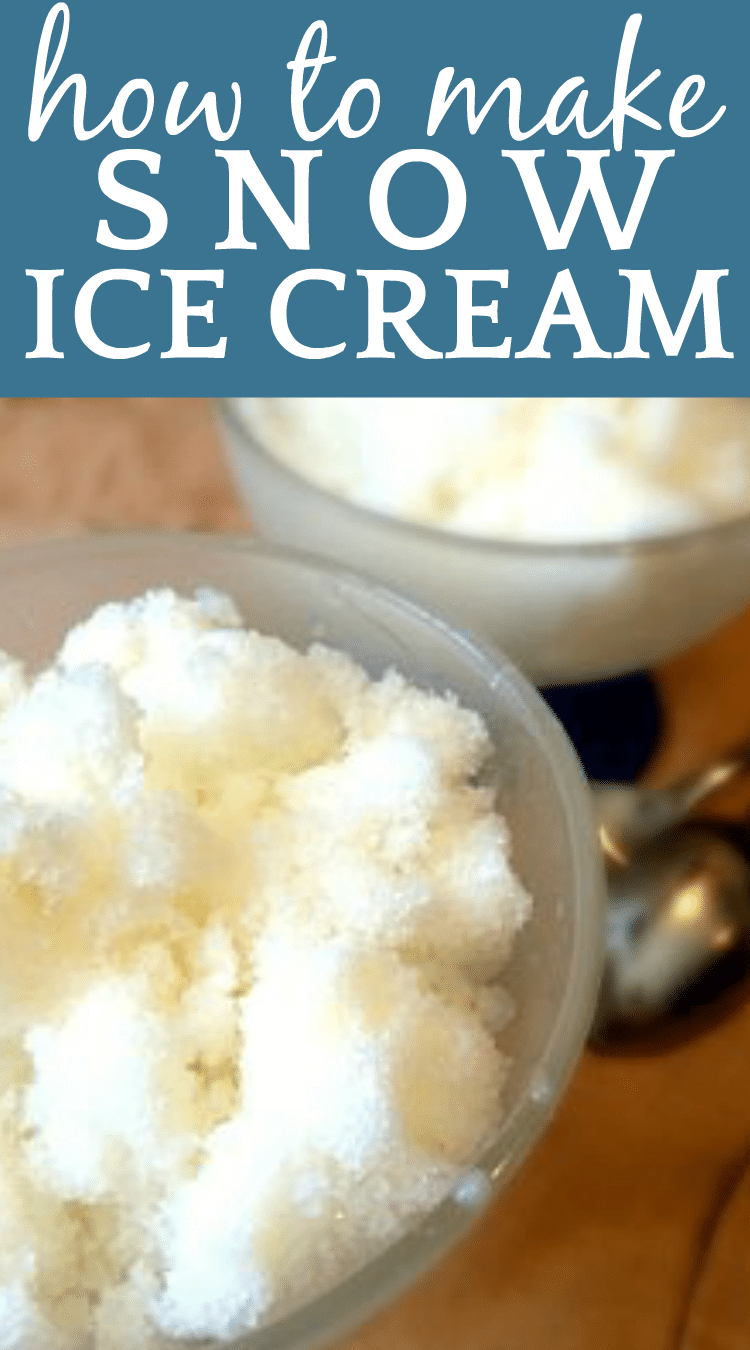 Let’s get to our icecream recipe for how do you make ice cream out of snow.

Here’s our particular recipe snow cream and how to make snow ice cream with milk (aka: snow ice milk).

It’s so much fun that you’ll want to put this on your winter bucket list if you’ve never made this favorite winter treat!

(And bonus? It doesn’t take a long time to make!)

Some people make this as snow ice cream in a bag, where you add the snow to a resealable bag, then add all the ingredients, seal the bag and squish around with your hands. It’s a fun way to make snow cream with milk for the kids!

Don’t be afraid to play around with the ingredients for snow ice cream. You can make this homemade ice cream with condensed milk, regular milk, milk substitutes, or even heavy cream will work and chocolate syrup.

You’ll see that we’ve added some optional ingredients in icecream, but you can definitely make it a yummy treat for kids with just the first three ingredient items!

For our snow days ice cream, we’ve paired it up with (what else?) a book about winter and snow for extra fun!

(One of our favorite winter activities is a recipe and read!)

is a winter snow book that follows a young girl who completely appreciates the offerings of winter.

Like most kids, she loves the snowflakes and sledding and even the hibernating animals and snow angels.

The illustrations are so cool in this book, with a feeling of cut out images that have been pasted onto the page.

(If you know me, you know how much I love unique illustrations.)

With all the snowy talk in the book, the snow cream is a perfect pairing for a theme recipe!

Plan ahead the night before a snowstorm (or during the day while it’s snowing) and put a big bowl outside to catch some clean snow.

Then, after an afternoon of playing in the snow, bring in your bowl of snow and make your snow cream ice cream!

You’ll have a fun, snowy snack from your recipe for old fashioned snow ice cream while you read your winter book!

Have you made it? Let us know your recipe for making snow ice cream tips!

Happy ice cream making and enjoy this fun treat and learning how to make ice cream with snow!

Let us know what you think about this recipe for snow ice cream!